Blue Snowball vs Blue Yeti – Which one should you buy? 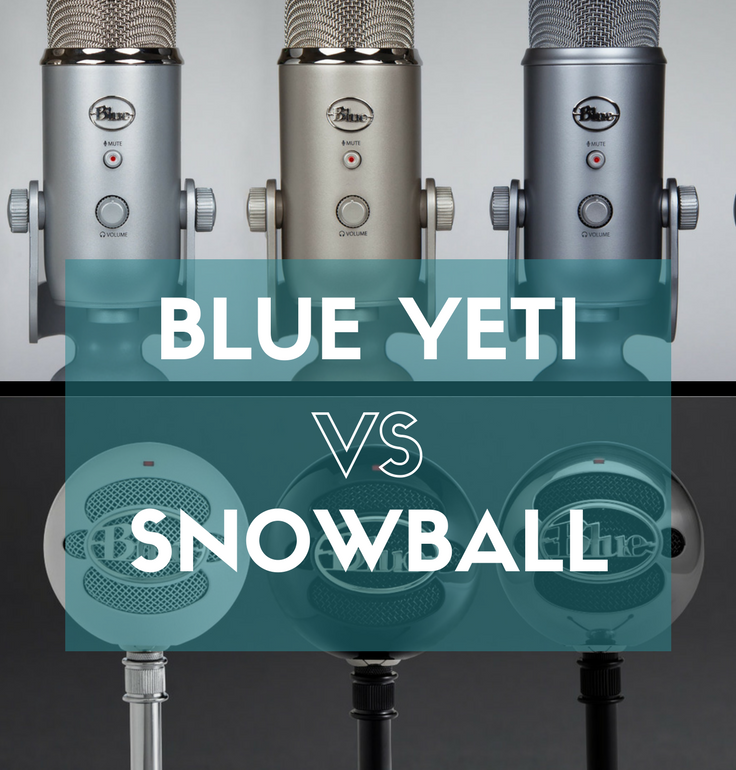 Whether you’re a YouTuber or a podcaster, one of the most important things to own is a quality mic. While there are tons of options out there, Blue brand microphones have been particularly popular with creatives all around the world - especially the “Snowball” and “Yeti” models. But which of them is the better choice? In this article, I’ll explore the pros and cons of each mic and will offer my thoughts on which one to choose.

​Why are Blue microphones so popular?

If you watch YouTube, there’s a big chance you’ve watched a YouTuber who is using either the Blue Yeti or Snowball. Why is that?

Well, there are many reasons, but the main reason is that both of these microphones are designed to be set up right on your table. In fact, both come with sturdy (and beautiful) table stands. That’s cool because you don’t need to deal with buying and setting up a more complicated stand (although getting a boom arm is a great idea!).

Another reason is that both of them are USB mics. Until a few years ago, you still needed an audio interface if you wanted to work with professional microphones. Thanks to their USB inputs, both the Blue Snowball and Yeti make recording to your computer a breeze.

Now, how do the Blue Snowball and the Blue Yeti differ from each other?​

Some differences already become obvious when you look at the technical specifications. So let’s start there:

First of all, good news: Both microphones are compatible with both Mac and Windows. They’re also both condenser mics and have the same accessories.

However, we can see some differences when it comes to the technical aspects: The Yeti has more polar pattern options, a wider frequency response and a higher sample rate. In case you’re not sure, that means the Yeti can pick up sound from more directions, and can record more information about that sound, too. In general, both a higher sample rate and a wider frequency response are signs of higher quality mics. So, when it comes to specs, the Yeti clearly wins. How cute is the Snowball? It looks slick, it looks cool, and you can’t not recognize it when you see it in somebody’s YouTube video.

Now, it’s great to have a good-looking microphone, but is this only a mic to look at or can it handle heavy use?

​I’m pleased to say that the Snowball has been built with the average in consumers in mind. You know, people like me who knock over their mics once in a while. While this is certainly not how you should treat your microphone, the Snowball is pretty sturdy compared to other mics, especially in its price range. However, there’s one issue that comes up: Due to its construction with the big ball on top, it can be, in fact, easier to knock over than other mics. If you are as accident-prone as I am, you might want to get a heavier and sturdier stand like this one.

Other than that, the Blue Snowball is quite minimalist. It doesn’t come with a ton of knobs and it has only one output (USB). That means that it’s easy to use and set up, however it also means that you have less control over your recording.​

One place where a less minimalist design would have helped is the polar pattern switch. On the Blue Snowball they are marked with numbers 1-3. But what does each number mean? You will have to either pull out the manual to find the right setting, or you’ll have to experiment a bit. This can become frustrating, especially if you use your mic infrequently. The Yeti looks completely different, although it still has a retro look. While one could argue about which microphone is more beautiful, in the end it comes down to taste - and isn’t that important? What’s more important to know is that the Yeti is a lot bigger than the Snowball. In fact, it is easily three to four inches taller and its stand takes up more space as well. If the size of the Yeti is bothering you, you can set it up on a boom arm. That way you can quickly get your mic out of the way when you don’t need it, and get it back just as quick when you do.

What’s great about the Yeti is that it offers an astounding amount of control to its users. It has controls for gain and volume and even possesses a mute button. It also has a zero-latency microphone output, which is great for checking your set up before you start recording.

Some users have commented on the rather wobbly knobs. If you’re using your Blue Yeti a lot, you will definitely have to be careful with them.​

When it comes to design and handling, it really depends on what you prefer: Would you like to have a smaller mic with less complex options or would you rather own something bigger that gives you more control?

Now let’s get to the most important aspect of a mic: sound quality.

The snowball offers three polar pattern options to choose from:​

In general, the Blue Snowball's sound is crisp and clear. Compared to other microphones in its price range, the Snowball is top-notch and will be good enough for any aspiring podcaster or YouTuber. Having said that, its quality is closer to a high-end consumer microphone than a professional microphone. Although it is great for its low price, it just can't compare with the Yeti.

Some users have also reported having issues with low volume recording. At the same time, the mic seems to be pretty sensitive when it comes to background sounds, especially in ominidirectional mode.

Many users have reported that their sound quality improved after they set a pop filter - and it's best practice to do so, anyway. You don't need to get anything fancy - here's a cheap but good pop filter option. (The giveaway is over, unfortunately.)

The Yeti has four polar pattern options to choose from:

The Yeti’s sound is present, natural and well-rounded. Compared to other microphones in its price range, it is an exceptionally good mic for creating podcasts, YouTube videos or voice overs. The Yeti doesn’t just have a well-balanced sound, it also has fewer problem areas than other mics in this price category: There is less hissing, booming or other noisy frequencies. Also, The Blue Yeti sounds good no matter if your voice is deeper or higher.

When comparing the sound quality of the Blue Snowball and Yeti, the ﻿﻿﻿﻿﻿﻿﻿﻿﻿﻿﻿﻿﻿﻿﻿﻿﻿Yeti﻿﻿﻿ ﻿﻿﻿﻿is the clear winne﻿﻿﻿﻿﻿﻿﻿﻿﻿﻿﻿﻿r. Its sound is a lot more rounded and natural than the Snowball’s. It also has more polar patterns to choose from and records less noise than the Snowball. Although the Snowball is a valid option for anybody wanting to start a YouTube channel or podcast, the Yeti is the more professional choice.

Get the Yeti here.

Should you get the Blue Snowball or the Yeti?

There are three cases in which I wold recommend the Snowbal﻿﻿l:

You can get﻿ the Blue Snowball ﻿on Amazon.

In all other cases, I would recommend getting the Yeti. It’s the more professional option with better sound, and it offers more control. Find more about the Yeti here.

What microphone do you use?​

What microphone do you use at the moment? If you’re a Blue Yeti or Snowball user, let us know in the comments if you are happy with it!​