Read This Before You Buy A Blue Yeti Mic Stand 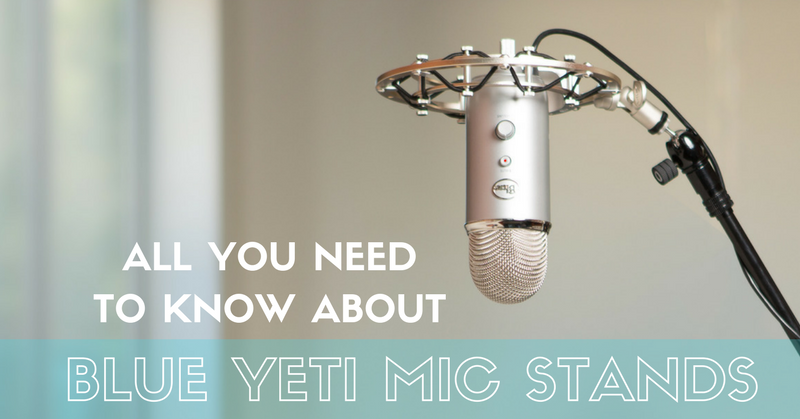 You’ve finally got your Blue Yeti mic - now you just need to set it up. But how? YouTubers and podcasters usually have a mic stand to help them with that. In this article, we’ll tackle what makes a good setup and what you should know before you buy a stand for your Blue Yeti mic.

Most people don’t absolutely need an extra mic stand for their Blue Yeti. I mean, one of the benefits of the Blue Yeti is that it already comes with a very stylish table stand:

However, if you have been using your microphone a few times, you might have noticed the disadvantages of the table stand setup:

Not good! So, what’s the alternative?

The most popular alternative is to get a boom arm stand.​

What you should know about Blue Yeti boom arm stands

The boom arm stand is the preferred type of stand for many YouTubers and podcasters. Why? Because with a boom arm, you’re always ready to start recording. Also, the arm can be folded and swivelled, which makes it easy to get the mic out of the way when you don’t need it.​

What’s important to know about buying a mic stand is that your microphone has to fit on it. With the Blue Yeti that’s a little tricky because​

In an unfortunate case, you can’t fit your Blue Yeti on the stand. In the worst case, the stand gives in and your mic crashes on your desk. Ouch!

So, if you want to avoid having to buy a new mic in a few weeks, you need to make sure you buy the right mic stand. The following stands will work with the Blue Yeti:

The Rode PSA1 is the most popular boom arm for the Blue Yeti for professional use. A lot of of big YouTubers and successful podcasters use this stand since it’s high quality and can support heavier mics. The downside is its heftier price tag. But hey, quality comes at a cost.

Get the RODE PSA1 here.

An alternative to the RODE PSA1 is this﻿﻿﻿﻿﻿ ﻿﻿bundle by Auphonix. It contains a boom arm, a shock mount and a pop filter - all designed for use with the Blue Yeti, which is pretty convenient for our situation. The manufacturing might not be as slick as the RODE PSA1, but it definitely does what it should do. And the great news: It also comes with a shock mount and a pop filter. Way to save some time and money!

You can get the﻿﻿﻿ Auphonix bundle on Amazon.​ Are you looking for a Blue Yeti mic stand? This is your budget solution. Like the Auphonix boom arm, this InnoGear stand was built with mics like the Blue Yeti in mind. What you can’t expect here is a super higher grade solution. It can seem somewhat filmsy, and in some cases, customers have reported problems with the plastic adaptor. However, if you don’t use your mic every day, this stand by InnoGear might be all you need.

Check the price of this stand on Amazon!

Do you want to create a more professional mic setup for your YouTube channel or podcast? Then, you might also consider getting the following accessories:

W﻿﻿hat’s a ﻿﻿shock moun﻿﻿t, anyway? A shock mount absorbs low end rumble so it doesn’t end up in your audio. Where would that low end rumble come from? It can come from handling your boom arm, for example. But it can also be transmitted through the desk on which your stand is mounted.

When you’re moving your arm on your desk or hit one of its legs with your foot, low end noise will usually travel through the boom arm to the mic.If you want to have maximum freedom while recording, getting a shock mount for your mic is something you should definitely think about.

Careful, though: You can’t just buy any shock mount. It needs to fit your Blue Yeti. Here are some that do:

Pop Filters help you to reduce unpleasant popping sounds that occur when the air from your mouth hits the microphone. This usually happens when you pronounce hard consonants like “p” or “t”. Popping sounds can become annoying petty quickly - so getting a pop filter is always a good idea. Here are some options:

In the comments, let us know which Blue Yeti mic stand you’re using and if you’re happy with your current setup.