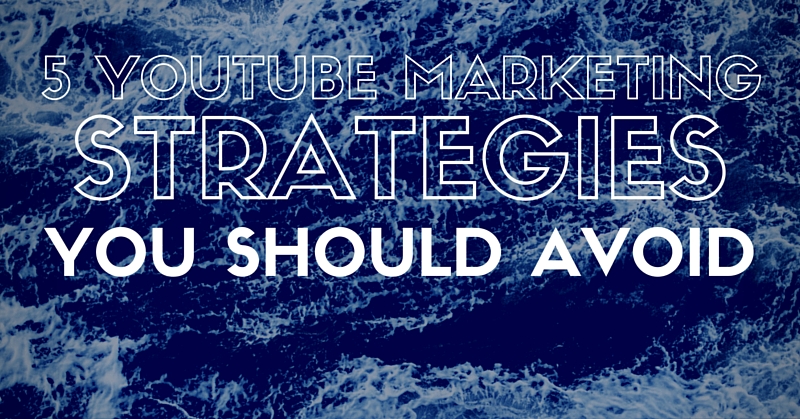 Wouldn’t it be great if there was a simple trick to get more YouTube subscribers and views? Sure that would be great. Unfortunately, life isn’t that easy and most YouTube marketing strategies that don’t take any effort will get you no results in the best case and will seriously hurt your channel in the worst case.

So which are the marketing strategies you should avoid when building your YouTube channel?

Even if you’ve never heard of this strategy, you might have used it in a couple of instances: if you have friends that are YouTubers, you probably gave them a subscription and they returned the favor. This is completely natural and there’s nothing wrong with it. The problem starts when you start offering sub4sub to random strangers:

Getting subscribers is nice but if they’re not genuinely interested in your content, they’re just a number. They’re not going to increase your views and won’t help build your channel.

For example, if you have 100 subscribers and get 25 views, YouTube will realize that you have an engaged audience and will assume that your videos serve your viewers. However, if you have 5,000 subscribers and only get 25 views, this looks to YouTube like you’re producing irrelevant or low-quality content. As YouTube is trying to offer the best content to its viewers, this might result in bad rankings.

Recommending the channel of another YouTuber in your video is called a shoutout. Just like with sub4sub, shoutouts can happen very organically or they can be used as a spammy marketing technique. In the first case, you happen to talk to a YouTuber you like and decide to do a shoutout for them (and if they return the favor, great!). In the second case, you offer a lot of channels shoutouts, if they do the same.

In the worst case shoutouts will annoy your viewers and will make them leave your video quicker, which will result in a low audience retention.

Audience retention is an important ranking factor, so you want it to be as high as possible.

Additionally, even if your channels have the same target audience, only a small percentage will take a shoutout to heart and really click on the other person’s channel. Instead of chasing shoutouts, it makes more sense to focus on finding channels to collaborate with. Collaborations are a great way to introduce your channels to each other’s audiences while creating something awesome. 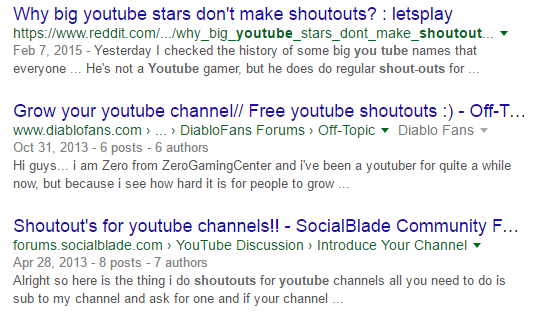 (Remember all these channels that became big because they got so many shoutouts? Yeah, me neither.)

Every YouTuber who has dived into YouTube marketing knows the importance of the usage of keywords. Whether it’s in the video title, the description or the tags, keywords are essential for ranking well. So how about stuffing each of those places with all kinds of keywords in the hope that YouTube will just rank your video well for all of them?

As clever as this trick seems, it’s one of the worst things you can do. If Google knows how to do one thing, it’s how to get rid of spammy content. Even if you get away with it for a while, YouTube’s algorithm will catch up with it at some point. Then your channel might have to face severe penalties: a drop in rankings in the best scenario, or the complete shutdown of your channel in the worst case. Do you really want to risk that?

Things that are considered keyword spamming:

Clickbait is the name for headlines or thumbnails that are inaccurate, sensationalists and unrelated to your content and misleading. For example, if you’re selling dishwashers and you’re using the thumbnail of a naked lady bending over. That would be pretty misleading.

In these cases, clickbait can even get your channel banned from YouTube.

In less severe cases, you might just annoy viewers. That’s not cool, either: even though you might get a few clicks, at first, YouTube will realize that they leave your video pretty quickly, which will result in a low audience retention. And as audience retention is an important ranking factor, your video will soon disappear in the search results.
Worse than that, though: if you had pre-existing subscribers, they will get annoyed with your clickbaity headlines and thumbnails pretty quickly and might leave your channel for good.

Building a YouTube channel can often be difficult and time-consuming. Wouldn’t it be great to just spend a couple of dollars and get to 1,000 subscribers already? In theory. And every YouTubers comes across websites and twitter accounts that offer you subscribers, views and likes for a relatively low amount of money. However, while paying for subscribers or views can be tempting, there are a few very good reasons not to do it:

If you need your channel to grow faster, for example because you’re a brand, you can pay for ads instead. This is entirely legal, and although it might cost a lot more, it will also be worth a lot more: the subscribers you’ll be gaining will be real people who are interested in your content and you won’t risk being banned only because you wanted to save a few bucks.

What do you think of these YouTube marketing strategies? Have you used any of them successfully (or regret having used them)? Have you come across other tricks that are just as questionable? Let me know in the comments!