What Is ‘YouTube Heroes’ And Why Are YouTubers Upset About It? 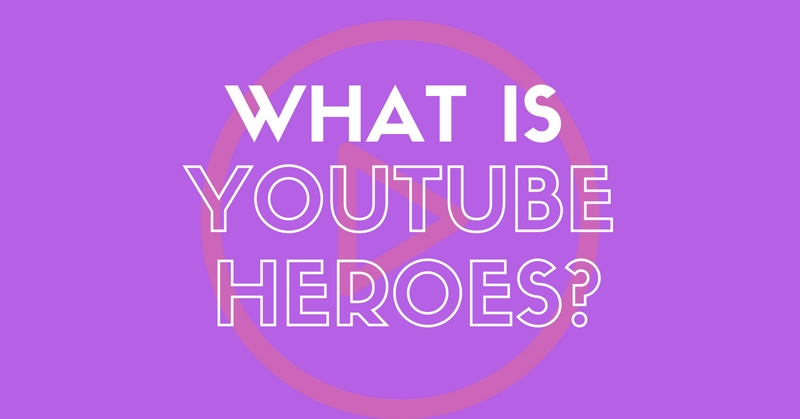 When YouTube announces major changes, it often causes shitstorms that stink up the internet for days. So it’s no surprise that that’s exactly what happened when YouTube revealed its new ‘YouTube Heroes’ program a few days ago:

The video has amassed an astounding number of 770,000 dislikes (and only 21,000 likes). But what does ‘YouTube Heroes’ mean for the future of YouTube?

According to ﻿YouTube, “YouTube Heroes is a program designed to recognize and reward the global community of volunteer contributors.”

Aha! But what can those volunteer contributors do?

The volunteers help create the best possible YouTube experience for everyone by:

By doing that, heroes will earn points which will unlock the following features:

Why are so many YouTubers upset about ‘YouTube Heroes’?

The devil is in the details, and we have to take a closer look to see what so many YouTubers are upset about.

​Flagging videos isn’t a new ability for YouTube users. However, YouTube Heroes incentivizes users who flag videos by rewarding them with points and more advanced features. Many YouTubers believe that this will lead to more “false” flagging:

Trolls could flag content they simply dislike and get rewarded. Even scarier for many YouTubers is the mass flagging tool. This means that trolls could flag a large amount of videos by the same creator, for example.​

Put a group of trolls together and suddenly you can create hundreds or even thousands of flagging reports for just one creator. False flagging has led to takedowns of videos and whole channels in the past and is the main reason why creators are so worried. It seems likely that YouTube Heroes will give trolls more power - and that’s the exact opposite of what a community should strive for.

It’s important to know that flagging is NOT what decides if a video will be taken down.

So if false flagging is a danger to YouTube creators, the main reason is not the amount of flagging but the competency and available time of the YouTube staff.Since YouTube probably expects a higher amount of flaggings now, it’s very likely that they’re working on that. However, the only way we’ll know is to wait and see.

YouTube already ran the very similar Trusted Flagger program before, where people with exceptionally high flagging accuracy were provided with more advanced flagging tools. It’s likely that YouTube will return back to something like that in case YouTube Heroes just doesn’t work out.

In any case, false takedowns are always going to be a problem for YouTube. There is always room for human error and even the best system can’t prevent that. We can only hope that YouTube takes the reactions and worries of its creators seriously and keeps improving the system.​

"I still can’t do that. After 10 year on this platform, 3.5 million subscribers and half a billion views later, I still can’t write anybody directly at YouTube." - boogie2988

I personally could imagine that the “direct contact” isn’t going to be as fancy as it sounds. If YouTube can’t provide direct contact to its top creators, it’s unlikely that it can provide that to millions of YouTube heroes. Before we know what that contact looks like, I wouldn’t necessarily jump to the conclusion that any random hero will get better service than most creators.

Another complaint that comes from the broad YouTube community (and not only from creators) is that YouTube heroes will work for free. YouTube made $9 billion in revenue in 2016 - and yet it won’t pay people who basically provide services for their members?

In particular, the creation of subtitles and captions is tedious work, and it’s how some people earn their living. So why would YouTube expect community members to work for free?

​Even with $9 billion in revenue, providing captions for everything (or even the top videos) just wouldn’t be profitable.

Folding Ideas sums this up nicely in his video:

“See, captions and subtitles should be the responsibility of content creators. [...] But YouTube doesn’t have the leverage to demand that people do that. They’re not Netflix - so it falls to a volunteer basis. And this is one of the holes of capitalism: Accessibility options are rarely directly profitable enough for producers to invest in without being compelled by an outside force. YouTube already isn’t profitable at all for all but a tiny of silver of users. I’m not talking about the 1%, I’m talking about the 0.0001%. [...] It’s such a monumental task that it’s not financially feasible to hire people to do it. Years’ worth of video is uploaded every day. They would never be able to catch up, even if they only stuck to the few thousand most popular videos on any given day.” - Folding Ideas

Shitstorm Reason #4: Closed captions and subtitles can be used against creators

Some YouTubers have pointed out that giving people the power over other creators’ subtitles and captions can have negative consequences, too: When those people use subtitles to harass you. Imagine filling a caption file with insults about the creator, for example.

Although this is probably not going to happen to most people, it could be a concern for creators that attract more trolls. The question here is if there will be any control mechanisms in place that will make the abuse more difficult. For example, they could provide a setting where creators can decide if they need to pre-approve newly added subtitles before they can be published. Until we know for sure if YouTube has anything in mind to prevent subtitle abuse, it’s hard to make a judgment.

Tip: One thing that any creator can do is to provide captions themselves. Many YouTubers are already doing that anyway, and if you’re using a script this is super easy to do (and can even help improve your ranking).

Crowdsourcing tedious tasks like adding subtitles and captions is a great idea to make YouTube more accessible, and incentivizing this work seems like a good step to encourage more people to volunteer. And if the program increases the flagging accuracy, that’s great.

​However, there will definitely be some people who will try to take advantage of those new powers and who will try to use them to harm creators. That’s why much will depend on how YouTube manages this kind of behavior in the future. We don’t know how YouTube plans to prevent the abuse of the YouTube Heroes program and how effective these plans will turn out to be. That’s why my advice in this case is going to be: Keep calm and create. If YouTube Heroes turns out to cause major trouble, you can still protest - but then your protest will be based on more knowledge and the actual reality of the program. Maybe it will suck, maybe it will be cool - but maybe we shouldn’t jump to conclusions before we’ve even tried it out.

​If this backlash shows us anything, it’s that many creators, including the biggest ones, have trust issues concerning YouTube. Many creators feel powerless when it comes to harassment and unrightful takedowns, and many feel like they are not getting the contact options they need and the perks they deserve. If YouTube wants to improve, it first needs to focus on that.

What do you think of 'YouTube Heroes' and the backlash? Let me know in the comments.