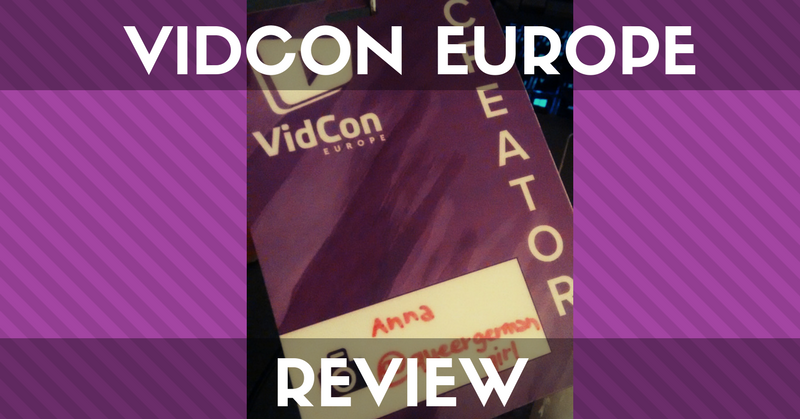 On April 8-9 I got to visit the first VidCon outside of California: VidCon Europe (in Amsterdam!). Since I’m a Yo﻿﻿uTuber myself, I bought a creator pass, which grants access to the community and creator track. In this article I sum up some of my thoughts on my experiences and some of the data I collected, especially on programming and diversity.

​I fucking LOVED it!

Being around hundreds of creators for two days was much more insightful and inspiring than I could have ever imagined. As a non-US YouTuber (who doesn’t live close to a YouTube space), I often feel pretty isolated creatively. The fact that my videos are watched by thousands of people every day doesn’t cross my mind much. To me, YouTubing rarely feels like a community; instead it feels like the other 12 hours I look at a screen at home. Hey, I like my life, but sometimes I miss having creative spirits around me, the ones who actually understand and respect what I’m trying to do.

So, yes, VidCon Europe gave me a sense of “Hey, what you do matters”, and “This is actually a thing!” - which is huge- and it inspired me to make more videos instantly (I know, my channel doesn’t look like it, but they’re in the works)!

Also, I can’t complain about the fact that my channel appeared in Sara Mormino’s slideshow during the Creator Keynote - next to Casey Neistat and Jimmy Fallon. I mean... whaaaaat?​ I seriously want some credit for not standing up and shouting “Did I win something?”.

Let’s get to the event, though. How was the programming?

Again, I LOVED the programming. There was not even one time during these two days where I skipped going to a panel, workshop or meetup - it was all just so damn interesting. From conversations about LGBT diversity to talking about effective workflows, I was hooked.

When it comes to panels, there were some cases where I had the feeling that a smaller panel (instead of 5-6 people) or a workshop format would have fit a topic better. Most of the time that was when the topic was rather practical, for example “Short Films on an Online Video Platform” or “Balancing Life and Creating”. Here, a more in-depth format could have helped me to collect more take-aways. This is more of a side note, though, and probably comes down to taste, too.​ But although I really enjoyed the program, what I had actually looked forward to the most was meeting some fellow YouTubers… and, like, talk to them.

So how did that go?​

Can I say that? I don’t think so. So let me explain:

Yes, I’m of the introverted kind. So talking to strangers doesn’t come easy to me. However, I’ve practiced it a lot at film festivals, meetups and conferences, which is why nowadays I can just go up to strangers and say something like “Hi, I don’t think we’ve talked yet, what kind of channel do you have?” And you know what? I did.

The reaction was mostly wide open eyes and body language that signaled “And why in flying spaghetti monster’s name are you talking to me?”.​

I honestly went to the bathroom once to check if there was something scary about me that I hadn’t noticed. Like a dripping fleshwound.

Now, as German myself, I knew what was up: People here are not used to talking to strangers. It’s not part of our Western European culture. In fact, I would react the same awkward way if someone approached me in the supermarket and asked where the ketchup is.

And it’s not just Western European culture, it was certainly also the younger age of many attendees (and the fact that they probably haven’t had much networking experience) that played a role.​

Although I saw some other people have an easier time meeting other people than I did (especially when they had already come with friends), I found that many attendees stayed with the same groups for most of the event. The same goes for people who were there alone: People who I saw alone Saturday morning were usually still hanging out alone Sunday afternoon.

It’s not VidCon’s fault that many Europeans are inherently bad at this, but there’s one thing that could have made things a lot easier for many people:

​Yes, there were meetups, but they were at the very end of the event. If there had only been a few at the beginning - or during! In fact, I made a few really cool connections at the LGBT meetup (awesome, btw, that there even was one!). And while I was there I talked with a few people about how I wish this meetup would have happened sooner so we could have all hung out more. They agreed.

UK and Europe are not the same thing

When I heard that VidCon Europe would be held in Amsterdam, I was glad. “Europe” is often used synonymously with “UK” and specifically “London” by US-Americans.

Just so you know why that’s weird: The UK comprises only about 8.7% of Europe’s population. This continent is pretty diverse!

However, that diversity wasn’t very present when it came to the YouTubers on the panels and workshops in the Community and Creator Track.

Honestly, after VidCon was over, I wasn’t so sure if my impression of the nationality diversity was skewed because of memory and my program selection, so I put all the speakers in a Google spreadsheet:

Note: I’m sure the data isn’t 100% accurate, since people don’t always tell us where they really live on the internet. There were also a few people who came from a different country than they were living in - so I just assigned them to one country. Furthermore, it’s important to know I only counted YouTubers who were panelists and speakers on the Creator and Community track, and that I didn’t count people who were there to represent their companies or who worked as part of the tech team on a channel. While diversity data about the industry track and its participants would have been interesting, it would have taken a lot more time and wouldn’t have anything to do with my direct experience.

I’m not even gonna talk about how about 30% of these YouTubers came from North America. I understand that it’s much easier and less risky to export part of your existing line-up than to create one that’s 99% new.

It’s this that made me think: Of 48 European countries, only 5 countries were represented (not that I need a YouTuber from the Vatican on a panel, but…).​

Furthermore, 75% of these European YouTubers came from the UK.

And actually, while I was putting the list together I found that a high percentage seemed to come from or live in London specifically. How many? At least 19.

That means that about 42%+ of the European speakers came from London.​ ​Now, the reason why I’m doing this dissecting is actually not to raise my fist in the air and demand change. Honestly, I think the creators and organizers of VidCon did an amazing job putting all of this together. I can’t even imagine how much work it must have taken to make this happen and I was super happy I had the money left to attend.

Also, VidCon did a much, much greater job in some diversity areas than other conferences: And of course, I totally understand that it’s difficult and time-consuming to look for new creators that might even speak a foreign language on their channels. How do you know who is good, speaks English well enough and would actually make an interesting panelist?

However, there’s the vision Hank Green talked about in his keynote on Saturday evening: He told us about how he excited he was that more and more creators could find their audience - especially in places where this would have been impossible before.

It’s a super exciting vision, which I share. However, if we want to do that, we also need to give more space to people from those places.

On the last page of the conference magazine, Jim Louderback declares his pride for having more than 80% European speakers on the industry track. He also mentions that European countries are as different to their neighbors "as the U.S. is to Mexico”. Understanding this is, I think, the key to a more diverse, fun and insightful VidCon experience. We are all pretty different - many of us don’t even understand those weird British accents.

I’m super happy that I had the opportunity to go to VidCon Europe. I also had the best time ever, learned a lot, and left inspired. If the creators of VidCon want to make the event a little more inclusive, this article gives some pointers (of course, they might already be aware).​

I’m really looking forward to seeing how VidCon Europe will grow and develop in the next few years - because there’s one thing I know: I’ll be there.

If you want to chat more about VidCon diversity, or need help sourcing non-English YouTubers, feel free to say hi at anna@whyvideoisgreat.com.​

I put other diversity-related data in the spreadshee﻿﻿t (gender distribution, number of POC, disabled representation), so feel free to draw your own conclusions (and let us know your experiences in the comments if you’re in a minority group).