Too Nervous to Shoot Your First Video? This Is What You Can Do 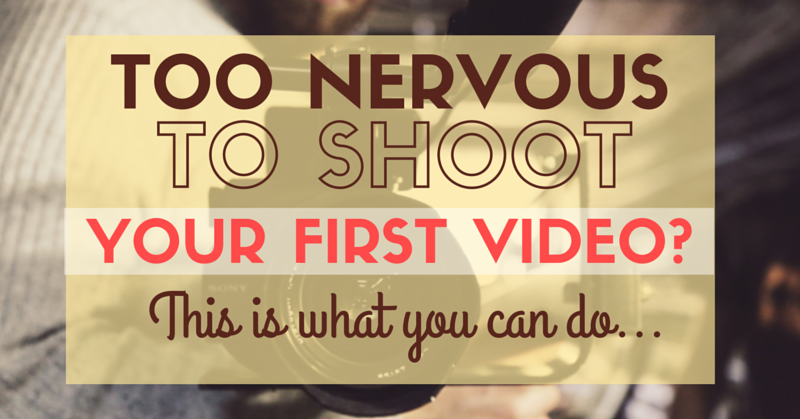 Shooting your first video and uploading it on YouTube or your website is a big deal. Most people are used to expressing themselves on the web in written form (email, facebook, twitter, blogs) or maybe in the form of pictures (instagram, pinterest, tumblr) – video, however, is still new to most of us. And while video has a lot of benefits, these benefits come with a downside: it takes some courage to create them. So how can you stop being nervous and start recording videos?

Video aren’t only more personal, they also make you more vulnerable. They reveal what you look like and the way you speak. They showcase your personality, your body language, your quirks. You’re showing more of yourself, which makes videos feel much riskier. People will judge you if you publish a video of yourself.

And not only that – you will also judge yourself. If you ever recorded your voice, you might know how weird it feels to listen to yourself. And watching yourself can be even more cringe-inducing.

The most important thing to know: it’s completely normal to be nervous. If you are just waiting for the nervousness and discomfort to subside, you might wait forever. So if you really want to shoot videos, you need to come to terms with the facts that:

If you’re not ready to face any of this, it might not be a good idea to record yourself yet (I will talk below about what you can do alternatively). If you are willing to get out of your comfort zone, though, here is how you can make this process a little easier:

One of the hardest things to do in front of a camera is to „just talk“. And if you’re already feeling nervous, you don’t want to worry about what to say next. This is why it makes sense to prepare a script. If you write down what you want to say in your video sentence by sentence, all you have to do is follow it when you’re recording.

If you feel like this is too restrictive and would like to speak more freely, you can also jot down some bulletpoints and use that as an orientation during the filming.

I personally write a script for all of my videos and use bulletpoints for livestreaming. 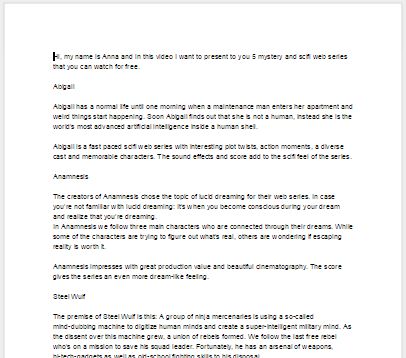 (An excerpt of my video script for my video “5 Free Science Fiction And Mystery Web Series”.)

Before you start hitting the dreaded record button, let’s make it a little less dreadful. By rehearsing your video script beforehand, you can gain security which will help you to be more confident and professional while recording.

In order to get the most out of your rehearsal, go through the exact steps that you would go through if you were recording (and yes, hit the recording while practicing!). Don’t just read your script silently or go through the steps in your mind. There’s a big difference between imagining doing something and actually doing it. The more accurately you can rehearse, the better you are prepared for when you are recording.

If you know that you will record your video only once, this will add to the pressure you’re feeling: recording once means that there’s no room for mistakes. Who wouldn’t get nervous in this situation?

By planning to shoot multiple times, you will have multiple chances to get it right. Also, each recording is like an additional rehearsal (which will help you perform better).

I record many parts of my videos three or four times to make sure I have a version I like. Obviously, it takes longer than just shooting once but I’m happy with the results I get that way.

4. Show it to your friends first

You recorded your video, maybe edited it, uploaded it – now it’s time to hit that publish button.

(The button of death… Okay, maybe not.)

In my experience, hitting „publish“ can be pretty scary. There’s that last surge of doubt running through your mind:

Should I really put this out into world for everyone to see?
Won’t people think I’m weird/pathetic/too fat/unfunny/boring/weird -looking/annoying/unqualified/stupid/unprofessional/…

In order to make that last step a little easier, you can insert a micro step in between:

If you use YouTube, you can make the video „unlisted“ – this will make it invisible in the YouTube search engine and only accessible to the people with whom you share the link:

After showing the video to a few (supportive) friends, it will be easier to publish the video for the rest of the world to see.

Still too nervous to record yourself?

Still not sure if you’re able to publish a video? Some types of videos don’t require you to be on camera.

If you do commentaries, explainer videos, Let’s Plays or reviews, you can easily just create a voice over and use footage that relates to your topic instead of yourself. I do this in my videos about web series, for example.

Too nervous to record your own voice?

Don’t even want to include your own voice? If recording your voice makes you too nervous, you can always collaborate with someone or even hire a voice over artist. Other video types such as edits and remixes don’t even require a voice over. 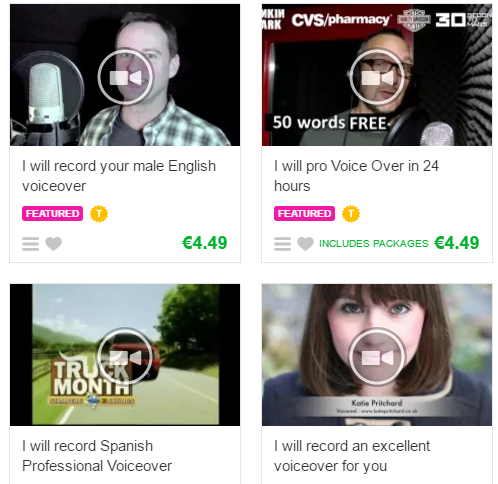 (You can get a short voice over starting from 5$ on fiverr, for example.)

You recorded your first video? Awesome! Share it in the comments!