When I started doing YouTube I expected a slow but linear growth of my channel. My idea was to put out a lot of videos to build a big subscriber base. The more subscribers I’d have, the more they would help me to promote my videos.

Based on my observations of other people’s channels, I would probably need at least 200 videos to get to 60,000 views/month (with each video getting 300 views per month) and I was willing to put in that work. Fast forward a year later and my channel gets about 100,000 views/month. That is about 166% more than I was hoping for and 500% of what I’d had. Did it take me 200+ videos to get there? Not exactly. How many did it take? 6.

How come my estimate was off by so much?

Well, what I hadn’t put into my original calculations was the possibility that some of my videos could become hits that would attract a much bigger number of views.

These weren’t viral videos in the classic sense – there was not much social sharing involved and my subscribers didn’t play a big role in making them a hit. Instead, these videos got most of their traffic from YouTube features like the YouTube search engine or the recommendations on the YouTube homepage and in the sidebar.

In this article I want to share an alternative success strategy that will help you to get viewers even if you have no subscribers.

When it comes to views, many YouTubers rely on their subscriber base. Don’t get me wrong, subscribers are the best and building a subscriber base is really important. If you keep building a loyal and supportive fan base, eventually you’ll have the potential to generate more and more views until you’re able to reach thousands or in some cases even millions of people.

However, when you’re just starting out, you’re not in that position yet. Building your channel is really hard when you’re a small YouTuber, and even if you’re the most entertaining person in the world, you will have a hard time because nobody’s watching yet.

This is where it makes sense to adjust your strategy.

If you want your channel to grow massively, you can’t rely on your current subscribers, you need to target new viewers. This insight might seem obvious to some of you, however, it’s an important realization for one reason:

There’s a difference between videos that attract new viewers and videos that solely have the purpose of serving your subscribers. Or to put it in other words:

In order to attract new viewers, you need to make different videos.

How are videos targeted to new viewers different from subscriber-targeted videos? Let’s see: 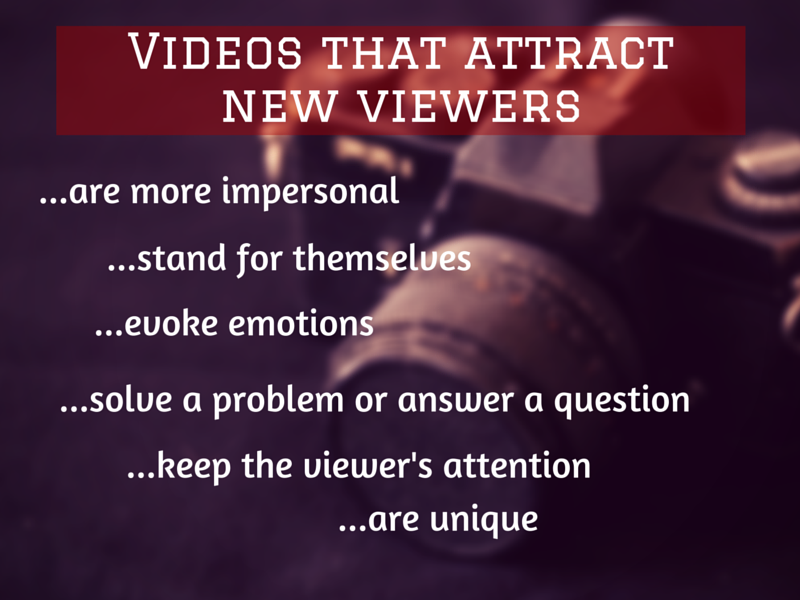 Although you can certainly attract new viewers through videos that have a personal message or story, you need to be aware that new viewers don’t know you yet. Therefore more personal videos won’t be as interesting to new viewers as they will to your subscribers.

An example: my last channel update video only got a few hundred views while some other videos I made reached 50k – 200k views. The main reason is that my channel update isn’t as interesting to someone who hasn’t watched at least a few videos of mine, while my hit videos (where I talk about LGBT characters in TV shows, for example) are. So if you want to attract new viewers, make sure your video doesn’t require any knowledge about you to be enjoyed.

Videos that are part of a continuous series are likely not going to bring a ton of new traffic – except if they’re able to stand for themselves.

That’s why it’s unlikely that a Let’s Play Minecraft video part 134 will be a huge hit if part 133 wasn’t.

An example for a series where each video stands for itself is my series “5 TV Shows with LGBT Character” that consists of 2 videos at the moment.

If your headline and your thumbnail promises or evokes emotion, you’re a lot more likely to gain new viewers. Effective emotions are, for example, curiosity, fear, awe and joy.

Even if you usually make more serious content, you could consider adding something more emotional once in a while. An example is JP Sears with his channel AwakenWithJP. While he uses his channel to talk about spiritual topics, his video “How to be Ultra Spiritual (funny)” brought him almost a million views and attracted many viewers that wouldn’t have found his channel otherwise. He even put “funny” in brackets just to be sure nobody misses it.

4 …solve a problem or answer a question:

Every day, thousands of people in your target audience are using the YouTube search engine. Why? Because they are looking for solutions, answers and content that is related to your niche.

This is where you come in: by creating content that solves the problems of your niche, you can easily get attention from your target audience.

D4Darious has many of these kinds of videos on his channel. He’s actually a filmmaker and actor but by uploading tutorials about filmmaking on his channel, he’s getting the attention of many other people in the film industry. Because of that he’s made it to more than 60,000 subscribers on his channel – way more than the average indie filmmaker.

This can be a great strategy for many businesses, too.

While you should always aim to keep the attention of your audience, it’s especially important with videos that attract first time viewers. First time viewers are especially unforgiving because they haven’t grown to like you yet. This is why they’re less patient and more likely to click away when you’re not fulfilling their expectations immediately.

When you’re crafting a video to attract new subscribers, make sure to get to the point quickly. Try to keep intros short and concise and don’t dwell on anything for too long if it’s not essential. If you’re not sure whether you’re able to keep the interest of your viewers, you can learn a lot by analyzing your audience retention statistics.

This is why it makes sense to make content for topics that haven’t been covered extensively yet. If you have a gaming channel, for example, you could think of retro, indie and odd games that you haven’t seen on YouTube yet.

By targeting new visitors with your video content and in your marketing, you are more likely to create a hit video. Sometimes it can take a little bit of smart promotion to give it the initial push, though. So don’t forget to:

If you’ don’t know how to use these features efficiently and how to promote your work, make sure to subscribe to this blog as I will tackle these topics soon. 🙂

When you’re not having success: re-adjust

Even if you’re following all these guidelines, there’s never a guarantee that your video will attract a big audience. Many factors are influencing your (potential) success on YouTube and it can take a while to find out what works for you. So don’t be discouraged if you don’t land a hit immediately. Instead analyze your results, optimize what you can and keep experimenting.

Not all of your videos has to conform to all of these rules. However, I’d like to encourage you to think about the intention you have with each video you’re creating: Who do you want to serve first and foremost – new viewers or your current audience?

Whichever way you decide to go with your video and your channel in general, is legit. Just be aware that the choices you make while creating your video will affect its marketability.

Who are you going to target with your next video?